Family - time to spread those wings 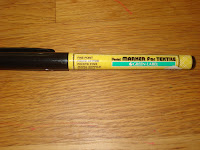 This day has taken a long time to arrive and then all of a sudden it was here. I must admit for all of my "can't wait, he needs it and so do I!" attitude, actually I've really been in living in that place in Egypt - DE-NILE.

Last night it dawned on me that I hadn't labelled anything, I had only just bought his school jumper yesterday - he may have grown over the summer - he hadn't. So with Oldest One watching  "return to neverland" (which is frankly where I wished I was) I began the arduous task of labelling. Now according to my friend atNumber29 (fabulous blog) there has been great debate amongst parents about the sticky subject of labelling. Now I greatly admired her son's socks which had labels sewn in at the top - but they were black socks - Oldest One's are grey but I am lazy. Plus I only ordered my iron in labels from M&S last week. So I pulled off the fabric pen lid and wrote his name everywhere. Including said grey socks. But wait it doesn't end there. Do you put the full name or initials or a combination? I opted for a mix variety. Do you use handy shop labels so at least when you come to pass the item on it can be reused??? AAAHHHHHHHHH.

Also the school prospectus clearly states light soled plimsolls for gym. Have you found any? I bought cheap but classic looking ones from M&S but they were too big and had an allegedly non marking black soles. So in a fit of New School Parent panic I returned them and headed to that Shoe Emporium named Clarke's. He got measured - by the way - he has the widest feet fitting on their scale but they don't make shoes in that width???? Huh??? Explain. Anyway the young lad bought out plimsolls - not only were they foul looking - a little like old people shoes with velcro strapping but they had black soles - allegedly non marking. What the F???? Now I'm scared. I bought them because I was scared. I haven't labelled them and they're in his gym bag at school........ Should I ask the school how they feel about the alleged non marking sole in case I have to return them (hence the not labelling) and quite frankly buy a nicer but cheaper pair from M&S (thus saving Oldest One's dignity and my obvious good taste) or should I pretend that they don't exist and quietly forget about them. It's such a trauma.

So this morning we tried to keep it all on the down low but excitement and tension were in the air. Lovely husband made a man style breakfast for Oldest One - sausage and egg whilst I contemplated staying in bed and forgetting about the whole thing. I was duly dragged out of bed to feed Little One. I still at this point was travelling up that wonderful river in Egypt and gamely thought I know I'll do my exercise, get it out the way. This was at approximately 7.45am. Bear in mind we have to leave at 8.30am..... I thought that's ok I can time it right, it'll be fine. So I whipped my way through JM Level 2 and arrived at 8.15am totally wrecked and sweaty with a major red face. Plus both children screaming. So in full on Mother mode I gave out instructions, check anyway, put shoes on, get bag etc whilst simultaeously changing Little One, bunging her in buggy and finally changing me. I did have time to put Oldest One in front of cbeebies (line of least resistance). Then that time arrived.

Oh bloody hell we have to do it. So under guise of Happy Chirpy Mummy I drag both kids outside and whip out the camera. Nothing like a first day photo. I swear the fuzzy ones are the camera's fault and not me wiping the lens after being teary. So then we walked to school. Again I am seriously NOT thinking about this. I am arming my child with words of wisdom such as "ask the teacher where the toilet is" and "don't pick your nose" and although I deliberately have walked the long way round I realise we're getting close. A few people have stopped us and asked about his first day and I am still being Happy Chirpy Mummy.

So we arrive and the truth is dawning on me. I have to send my Oldest One (still a little boy in my mind) into the next stage of his life with a big smile on my face. So we did it. And I faced that dreaded school gate thing of everyone sizing each other up. Me, being the slightly out of breathe (there is a steep hill up to the school) red faced weirdo trying to control her kid and all the others who look laid back, slim and magazine perfect. I am the anti yummy mummy - there's not even a rhyming phrase for me!

They called all the kids together, got them to line up and took them in. The cameras and the iphones came out and there were a few tears from kids and adults. Me, as soon as he walked into the classroom I ran. Not because I'm mean but because of the tears. I promised myself I wouldn't cry but my lip wobbled and that was it! Ran down the hill and phoned the husband a blubbering mess. So once I got past that and took some deep breathes, I bunged on the headphones, pumped up the volume and cranked out Led Zeppelin and sang my heart out all the way home.

By the way I caved and have ordered nice looking plimsolls - I will retrieve gym bag tomorrow ;-)

So I am a little way through my fitness programme. I have progressed to Level 2 with Jillian Michaels and it is super tough. How many planks can a girl do! As an avid fan of the Biggest Loser USA I have added a Bob Harper yoga workout. OMG yoga is hard - especially the Bob way. I am usually a pilates girl but having seen Bob H do the yoga on the Biggest Loser USA several times I thought I'd give it a go. But seriously how many times can a girl get into the downward dog with a leg in the air without falling over or trying desperatelyto do the warrior stance into a triangle - it is hard. Maybe I should look at yogalates instead? 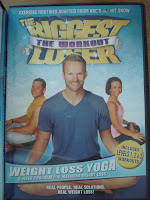 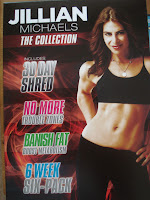 Each and every day I am getting into the workout gear and throwing some strange shapes in my sitting room. If people looked through the window they'd be scared off - never mind the burglar alarm - no one would want to cross a red faced sweaty wreck of a woman shouting at the TV screen. The things I shout are not for small ears either and I think my son might be slightly scared of me. I sound like a beached whale and the red faced sweaty huffing and puffing is not my most attractive side.

I have tried to encourage my husband to join in but it's as tough for him as me. I do feel a tiny sense of yayhey I can do it and you can't but let's keep that one secret!

I have also it my strange sense of "we absolutely resolutely must stick to this plan", also purchased the Jillian kickboxing DVD. People I am officially insane. Also now my oldest (I have an oldest!!!!!!) has just started school (more of that later) I can concentrate on "Getting Fit". I did actually manage to fit in a JM Level 2 workout this morning thus confirming to all the new school mums that I will meet that I am in fact the one to avoid. The slightly strange one with the deranged manic red faced look. If you come across one of those on the school run, maybe it's because she is indeed strange and manic because she's just done a J Level 2 workout! It's a bit like Men in Black where Will Smith figures out all it's not what it seems!